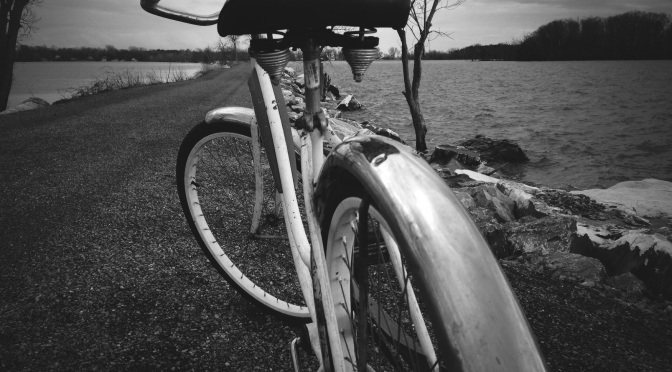 A Frame for the Kneeling

There is a skip and a jump in my head and my heart when I set out on my ancient Schwinn. It creaks right along with my own rusted joints as I turn pedal over pedal, and the rhythm of it soon relaxes right down my back, emptying my itching mind of a day’s persistent realities, like a girl emptying a basket of flower petals, one by one, paying no mind where they fall.

Last week I took my second ride of the season. I creaked and pedaled over a mud-covered path, my tires sinking into mud that accepted its new shape without complaint.

Before I left, I had a moment of conversation with myself over whether I should bring my phone or not. I don’t live in a state of worry that compels me to carry it at all times. And, oh, to make the trip unfettered, what a sacred delight that would be.

It was the sky that changed my mind.

Grey and overcast, with an icy wind trembling my shell of a jacket, I knew the path I wanted to reach would be presenting itself to me in a spectacle of weathered shadows and turbulence. I wasn’t concerned about rain, but

an overcast sky ripens the shapes outside,

offering photographic opportunity from which I cannot often partake. The camera on my phone was all I had. It would have to do.

The mental volleying brought to mind a comment a friend had made a couple of weeks ago. Our kids were embarking on an Easter egg hunt and while we were all scattered across the lawn helping and encouraging the kids, someone remarked that no one was taking pictures.

He responded, saying that he would rather live life than watch it happen through the lens of a camera.

My first thought was one of agreement. I watched in exultation as Chloe showed off a skill she has been working on relentlessly in school. With Rett Syndrome, manual dexterity is no simple thing, so to see her picking up the Easter eggs, and opening her hand over the basket as Sean encouraged her to put them in, reminded me of the tiny miracles I have learned to watch for.

Had I been scrambling for a camera, I would not have rested in the watching.

So how could I rectify that hearty agreement with my own need to interpret the refractions around me through lens and shutter?

I ruminated over this as I pedaled. The path took me through wetlands and fresh clouds of bugs, newly hatched. Soon, outcroppings of rocks broke through, moss-covered, and moist from the recent rainstorm.

I stopped for a moment, peeking through the trees not yet leaved, clothed only in bursts of wild mushrooms.

I took out my phone and tried to take a picture. The resulting image was unremarkable, unlike the sight I beheld.

Maybe my friend was right.

I paused to take a picture of that breaking.

The path slices across the lake as the canopy of tress breaks away, an old railroad turned trail.

I pedaled some more, watching a stubborn gleaming of sunlight move across the rough, splashing water, far out, too far to feel. I turned to take in the lake on the other side of the path, and was struck by its stillness.

Glassy, smooth, unaffected by the roiling and splashing and noise coming from the other side.

How I longed for the stillness in my own boiling mind.

I wondered at the limited lens on my phone. Could I capture both sides of the lake at once? I paused my pedaling again, took out my phone.

I watched the sky slide across the reflection, noticed a dancing of tiny black dots, growing, it seemed, as they fell from the sky. Swallows dove and danced, small specks whistling the faintest of tunes. Geese honked overhead, scoffing from their own organized flight.

Would I have even seen the swallows, had I not stopped? Would I have stopped, if not to take a picture?

That is life through a lens for me.

I never need an invitation to stop and drink in a moment, letting it quench the burnings of days that try their best to beat me back. But, sometimes, in my purpose, in my pedaling, it takes the quiet tapping of the camera in my pocket to remind me to pay attention to the moments that are begging for more than a nod of acknowledgment or approval.

Standing beside my bike, scanning the shadows around, above, under me, I wanted to steal for myself a moment, fold it up into a snapshot and keep it,

greedy to make it my own.

I knelt on the wet gravel, going down on one knee, then another, the harsh angles of rocks pressing in, the leftover rain soaking through. Life through a lens makes you hungry for new angles. I snapped some pictures from there.

I looked between the stillness on one side of me, and the waves on the other, aching from the burning. The still water beckoned.

But I watched from my knees as a massive branch was beaten by the waves, its knots and divots being smoothed by the water washing around and over it,

crashing and cleaning away the old and worn in favor of the new, which, as it turns out, had been hiding underneath.

I lifted my phone, snapped a single shot, lowered it again.

If it is a slaking I am after,

this is my cup,

and I will fill it here.

I don’t disagree with my friend. There will always be times I keep the camera stashed, not wanting any barriers between me and a moment.

But the lens does not keep me from living. Instead, it reminds me to look, to see.

It gives me an excuse

to muddy my knees, and my pretenses.

My old, creaky bike carried me back through moss, through mud, through bugs and bogs.

The lake will be different when I go back, but that is one of the things I love about living close to an imposing feature of nature. It shifts, and invites me to witness its changes. And I shall record them, in pictures, in words, and in my mind,

tucked away into corners that will strain from the filling.

Click here to learn more about the artwork featured on each.little.spark.

This site uses Akismet to reduce spam. Learn how your comment data is processed.

a shine and a song

When God had made The Man, he made him out of stuff that sung all the time and glittered all over. Some angels got jealous and chopped him into millions of pieces, but still he glittered and hummed. So they beat him down to nothing but sparks but each little spark had a shine and a song.

Their Eyes Were Watching God